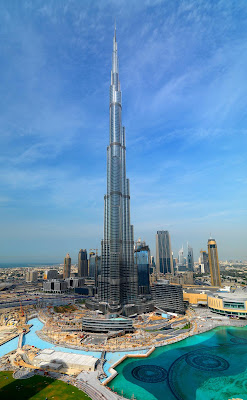 Dubai, UAE; December 31, 2009: Members of the public will be able to watch the inauguration of Burj Dubai on January 4, 2010 by His Highness Sheikh Mohammed Bin Rashid Al Maktoum, UAE Vice President & Prime Minister and Ruler of Dubai, from the adjacent Burj Park Island.

The 29,000 sq m park is set on Burj Dubai Lake and will be a spectacular new leisure attraction in Downtown Burj Dubai, the 500-acre ‘mega project’ developed by Emaar Properties and anchored by Burj Dubai, the world’s tallest building.

Overlooking the Waterfront Promenade of The Dubai Mall, Burj Park Island also has a designated area for viewing The Dubai Fountain, and is immaculately landscaped with greenery and ample seating areas.

Final work on the many features surrounding Burj Dubai is fast nearing completion. The second section of Burj Dubai Lake has been filled - an area measuring 36,000 sq m and containing 47,000 cubic metres of water. The finishing touches to bridges linking the promenade to the park are also being applied.

Mr. Abdulla Lahej, Executive Director, Dubai Project Management, Emaar Properties, said that the addition of the new Burj Park Island will bring even more visitors to Downtown Burj Dubai. “Downtown Burj Dubai is an integrated development of staggering proportions, and as each new facet of the project is completed, its tourist appeal becomes even greater.”

He added: “The opening of Dubai Mall and The Dubai Fountain, and the ongoing activities along Emaar Boulevard have all sustained extremely high visitor levels to the area. With the completion of Burj Park Island and Burj Dubai Lake, and with the inauguration of the tower itself, tourism to Downtown Burj Dubai is bound to set new records.”

Anticipated to be home to 135,000 people, Downtown Burj Dubai already has two shopping malls – The Dubai Mall and Souk Al Bahar; five hotels – The Address Downtown Burj Dubai, The Address Dubai Mall, The Palace – The Old Town, Al Manzil and Qamardeen; and a dedicated office complex – Emaar Square. To date, thousands of homes in various residential developments in the community have been handed over.

The Dubai Mall, with over 1,200 retail outlets including flagship stores and Middle East debuts of global brands, has catalysed the retail sector creating 10,000 new jobs and attracting an annual 37 million visitors in the first year of its opening.
Posted by Imre Solt at 5:13 PM