‘Vertical travel’ within Burj Dubai in the world’s highest elevators 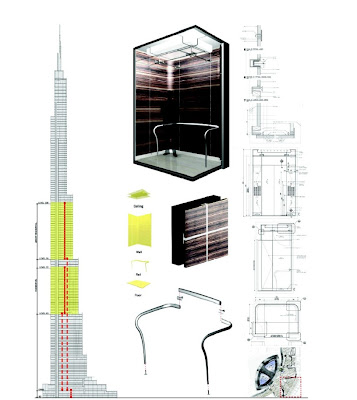 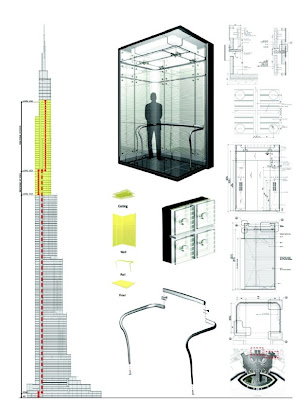 ‘Vertical travel’ within Burj Dubai in the world’s highest elevators

57 elevators and 8 escalators streamline ‘travel in the Vertical City’
Double-deck elevators exclusively for visitors to At The Top, Burj Dubai, the observatory deck on Level 124
More than 75,000 professionals and skilled workers involved in elevator installation

Dubai, UAE; December 30, 2009: Call it vertical travel with a difference. Burj Dubai, the world’s tallest building by Emaar Properties, set to be inaugurated on January 4, 2010 to mark the fourth anniversary of the Accession Day of His Highness Sheikh Mohammed Bin Rashid Al Maktoum as the Ruler of Dubai, is setting new trends as well as world records in elevator and escalator installation and operation.

In what is described as the ‘intelligent elevator installation,’ Burj Dubai will have 57 elevators and eight escalators streamlining the travel needs of the residents and visitors to the tower. These elevators also mark the highest installation in any building.

“Burj Dubai is envisaged as a work-live-play environment - a vertical city for all practical purposes, with homes, offices, corporate suites, a luxury hotel, retail outlets and fitness facilities. The advanced elevator technologies used in Burj Dubai are designed for seamless performance with a focus on safety, efficiency and the convenience of users,” said Abdulla Lahej, Executive Director, Dubai Project Management, Emaar Properties.

The mixed-use Burj Dubai features 1,044 residential apartments including 144 Armani Residences and 160 ultra-luxury hotel rooms of Armani Hotel Dubai. The Corporate Suites comprise 49 floors. To move easily in this environment to spectacular heights, the elevators have been carefully placed to different zones.

Each elevator zone serves different audiences – from visitors to office workers, to hotel guests, to residents – maximising their efficiency as a result and saving time, by the use of a sky lobby system.

The sky lobby is an intermediate floor where residents, guests, office staff will change from an express elevator to a local elevator, which stops at every floor within a certain segment of the building. Burj Dubai’s sky lobbies are located on level 43, 76 and 123 and will include a lounge area, a kiosk, amongst other amenities.

All elevators have been supplied and installed by global elevator leader Otis. No elevators are installed to travel all 160 floors of Burj Dubai. Instead, they are strategically grouped to align with the floor layout, offering passengers a direct express service to their destination by bypassing other floors.

The main service elevator, positioned in the central core of Burj Dubai, has the world’s highest elevator rise at 504 metres (1,654 ft) – more than the height of Taipei 101 in Taiwan (448 metres) and almost one-and-a-half times as high as Empire State Building in New York (381 metres). It travels at 9 metres per second, and also has the world’s longest travelling distance for an elevator. Another service lift in the spire, has the world’s highest landing at 636.9 metres.

The elegantly designed double-deck elevators with built-in light and entertainment features including LCD displays will exclusively serve visitors to At The Top, Burj Dubai, the world’s highest outdoor observation deck situated on level 124 of the tower as well as office users transferring at the sky lobby at level 123.

These double-deck units – used for the first time in the Middle East by Otis – are the highest rising double-deck elevators in the world and will travel at the speed of 10 metres per second. They have a capacity of 12 to 14 people per cab. Another highlight is the state-of-the-art circular observation elevator that serves three floors in the Armani Hotel restaurant area.

Unique to the elevators are 24 ‘green technology’ Gen2® machine-roomless elevators featuring flat polyurethane coated seat belts that reduce energy consumption by up to 50 per cent compared with conventional units. These energy-efficient Gen2 elevators do not require any additional lubrication, making them cleaner for the environment.

The elevators in Burj Dubai are indeed a celebration of sophisticated engineering. Passengers enter their chosen floor using keypads or interactive touch screens before entering the elevator. The system, after assessing the passenger requests, automatically assigns the passengers travelling to the same or nearby floors, thus reducing waiting time and travel time.

Since the inception of project until June 2009, more than 75,000 professionals and skilled workers from the Otis team have been involved in the installation of elevators and escalators at Burj Dubai. Work on the elevators started in May 2006.

Burj Dubai is currently over 800 metres (over 2,625 ft) high with over 160 floors, and is located in the centre of Downtown Burj Dubai, described as the new heart of the city.
Posted by Imre Solt at 12:23 PM