Burj Dubai by the numbers 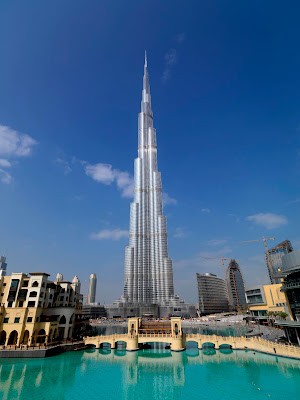 Burj Dubai by the numbers

Dubai, UAE; December 24, 2009: When the world’s tallest building is inaugurated on January 4, 2010, by His Highness Sheikh Mohammed Bin Rashid Al Maktoum, UAE Vice President & Prime Minister and Ruler of Dubai, the record books will brace themselves to receive a flood of new entries.

For many, Burj Dubai will be defined by its soaring beauty. Others will marvel at the audacity of its engineering. Countless more will cherish the breathtaking views from At The Top, Burj Dubai, the observation deck on level 124.

But for the compilers of the record books, it will be the statistics that etch the deepest impression.

At over 800 metres and with more than 160 floors, here are some of the essential numbers associated with the world’s tallest building:

• 95 – the distance in kilometres at which Burj Dubai’s spire can still be seen
• 124 – the floor location of ‘At The Top, Burj Dubai’, the world’s highest and only publicly accessible observation deck with an outdoor terrace

• 160 – the number of luxury hotel rooms and suites
• 605 – the vertical height in metres to which concrete was pumped in the construction of Burj Dubai, a world record for concrete pumping

• 504 – the distance traveled, or ‘rise’ in metres of Burj Dubai’s main service lift, the most of any elevator

• 49 – the number of office floors, including the 12-floor annexure
• 57 – the number of elevators
• 1,044 – the total number of residential apartments inside Burj Dubai
• 3,000 – the number of underground parking spaces
• 5,500 – the capacity in kilograms of the tower’s service lift
• 31,400 – the amount of steel rebar in metric tonnes used in the structure of Burj Dubai

• 28,261– the number of glass cladding panels making up the exterior of tower and
its two annexes

• 15,000 – the amount of water in litres collected from the tower’s cooling equipment that will be used for landscaping irrigation

• 900 – the length in the feet of the world’s tallest performing fountain, The Dubai Fountain, that lies at the foot of the tower