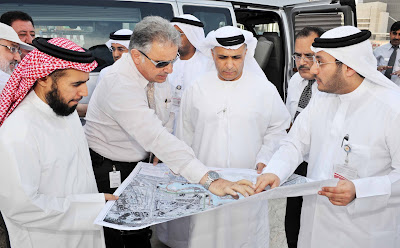 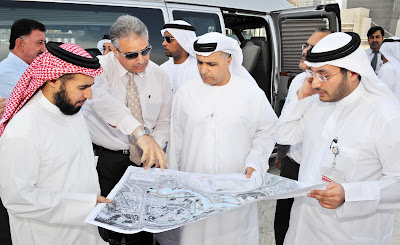 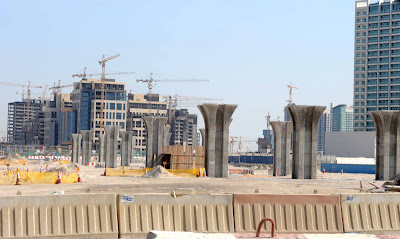 H.E. Mattar Al Tayer, Chairman of the Board & Executive Director of the Roads & Transport Authority (RTA), confirmed that work is progressing in the Parallel Roads Project at the Business Bay area and the project is set for completion according to the approved schedule in two phases; the first to be completed in the first half of 2011 and the second phase to be completed by the end of 2011.

Al Tayer made this statement during a site tour of the project which is considered a key part of the Parallel Roads (to Sheikh Zayed Road) Project which comprises the construction of two new parallel corridors in the area between Sheikh Zayed Road and Al Khail Road; namely the Eastern Parallel Road and the Western Parallel Road. These two roads branch out of Sheikh Rashid Road in the north and extend southward to terminate at the outskirts of Abu Dhabi Emirate. These road sectors which extend 108 km, comprise bridges and intersections at the junctions with perpendicular roads with a total length of 42 km.

Due to the massive nature and expanse work scope of the vital Parallel Roads Project, construction works have been divided into ten phases; some of them have been completed, and others underway while four phases are still under the initial design, final design or tendering process.

At the start of the tour, Al Tayer was briefed on the work progress in this phase of the project which costs about 84 million dirham and aims to complement the internal roads at the Business Bay district in an area located between Sheikh Zayed Road in the north, Meydan Road in the west, Financial Center Road in the east and Al Khail Road in the south. The project comprises the construction of roads extending 6 km to link the parallel roads with the internal roads of the Business Bay to ease the traffic flow in the area in addition to the construction of road linking up with Al Khail Road. The Project also comprises the construction of a 200-meter long bridge, 12 light signals and storm water drainage network.

The Chairman of the Board and Executive Director of the RTA inspected the work progress in Phase II of the Project; which costs about 214 million dirham and comprises the construction of roads extending 16 km, a 600-meter long bridge, 7 light signals and storm water drainage network.

“The Parallel Roads Project is one of the mega projects undertaken by the RTA and its first phase comprises the construction of bridges leading to Al Maktoum and Al Garhoud Bridges involving the construction of two main bridges through using precast concrete slabs in a sector extending 4236 meters in length and 15 meters in length with two lanes in each direction. The Project serves the traffic movement from Sheikh Rashid bin Saeed Road at Lamcy Plaza to 313 Road opposite to the World Trade Center. It also serves the traffic in the opposite direction from 313 Road opposite to the World Trade Center to Al Maktoum and Al Garhoud Bridges as well as Dubai – Al Ain Road. The project comprises improvement of the traffic signals at the World Trade Center, infrastructure works and lighting works.

“The completion rate has almost reached 90% in Phase III (B) extending from a point near Emirates Hills across large urban communities such as the immediate vicinity of Jebel Ali Racecourse, Emirates Hills, Springs, Meadows, Jumeirah Islands and Jumeirah Park. The road which extends about 20 km accounts for 14% of the total length of the Parallel Roads Project, comprising three to four lanes in each direction. The Project, which is being undertaken by Al Naboodah Construction Co, includes the construction of six bridges, and three underpasses at the back of the Eastern & Western Roads, in addition to several construction works covering utility lines, pavements, road signage & marking, lighting, sewage water, rainwater drainage and landscaping.

“The completion rate has reached about 60% in Phase III (A) at Jumeirah Lakes Towers; which links property complexes of Emaar and Nakheel companies in the area to the south of Sheikh Zayed Road between Interchanges 5 and 5.5. The Project, which is constructed by the Italian Todini Co, includes the construction of a 10-km long road of 3 lanes in each direction, 7 separate bridges, and one tunnel. This Phase, which accounts for 7% of the total Parallel Roads Project, also includes construction-related activities such as utility lines, pavements, signage, road marking, lighting traffic diversion, and the protection of the existing utility lines.

“The Contractor of the first contract of the Parallel Roads Project is nearing completion of the contract works which include construction of roads at Al Barsha, Al Qouz Industrial & Residential Areas stretching from Hissa Road in the south up to Meydan Road in the north in a total length of 15 km in the Eastern Parallel Road and 18 km in the Western Parallel Road. The roads comprise three lanes in each direction and several intersecting arterial and express roads such as Umm Suqeim Road, Latifa bint Hamdan Road and others. It also includes 25 signalized junctions in addition to other related road works such as irrigation, sewage, lighting and signage.

“The completion rate has hit 55% in Phase IV of the Project which serves Jebel Ali Free Zone, and Al Maktoum Airport. It comprises the construction of roads extending 22 km with two lanes in each direction of the Eastern and Western Parallel Roads,” said Al Tayer in a concluding remark.

Captions:
- Mattar Al Tayer attending to a briefing about the work progress in the project.
- Work in the project progresses according to the approved schedule.
Posted by Imre Solt at 12:08 PM