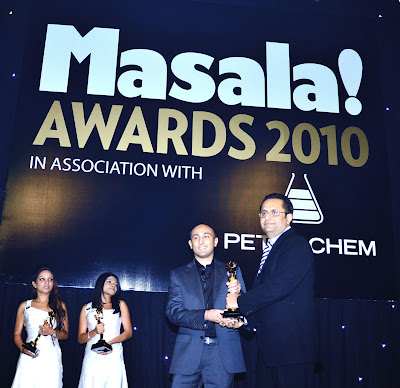 Danube Building Materials, the leader in construction, building materials and shop fitting industries, has announced that its Chairman, Rizwan Sajan, has been named ‘Businessman of the year’ at this year’s edition of the Ahlan! Masala Awards 2010, held recently at the Atlantis, The Palm in Dubai, UAE. Sajan was cited for his leadership in increasing the growth of the Danube Group into an AED 1 billion conglomerate - effectively driving in growth and increased revenues with the launch of the Danube BUILDMART chain despite the global financial crisis.

In securing the ‘Businessman of the year’ award, Sajan’s excellent leadership, dynamism in strategy, and ability to expand the growth of Danube, both in terms of people and partnerships, were key factors in bagging the award. Within the last five years, Danube has registered exponential growth in revenues, which has exceeded AED 1 billion in 2009, an investment of AED 100 million in the expansion of its ‘Danube BUILDMART’ concept across the GCC, and the addition of 350 staff during the height of the recession. The company, which is known to provide world class construction building materials and interiors and exteriors products and services, recently inaugurated its AED 50 million 'Danube BUILDMART' in Dalma Mall, Abu Dhabi, the largest of all showrooms opened by the company, and prior to that the opening of its AED 15 million store under the same banner in Ibn Battuta Mall, Dubai.

“I am very humbled with this award and the confidence they have placed in me not only recognizes the hard work I have put into the company but also affirms the dedication of Danube’s employees in helping us achieve success and growth,” said Rizwan Sajan, Chairman, Danube Building Materials. “Having been also recognized recently in the MRM Business Awards and the Dubai Quality Awards demonstrates our continued commitment towards providing our customers with world class construction building materials, interiors and exteriors products and anything they will need to improve infrastructure and the aesthetic value it holds.”

About Danube Building Materials FZCO
Established in 1993, Danube Building Materials FZCO provides more than 25,000 products in stock and in-house value added services in all of its 17 showrooms across the UAE. The company operates from its head offices – a 285,000 square foot facility in Jafza north and a 365,000 square feet base in Jafza south, which houses its logistics centre, kiln drying facility, factory and warehouses. From a small trading firm, Danube has grown into one of the largest building materials company in the region, with 25 branches worldwide - 17 in the UAE, one in Saudi Arabia, two each in Bahrain and Oman and three in India, in addition to procurement offices in China and Canada. Danube has a team of 1000 people working from strategic locations in across the Emirates, including Jebel Ali, Deira and Abu Dhabi. The company has been and is currently involved in major projects across the UAE, Oman and Bahrain, including Emirates Hills, the Burj Al Arab, Shangri-La Hotel, Grand Hyatt, Motor City, Burj Dubai, Dubai Airport Terminal 3, Yas Island, Reem Island, Saadiyat Island, and Al Raha Beach Hotel, among others.