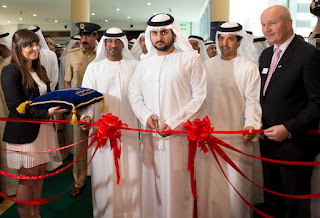 MIAMI AND THE BEACHES LAND IN DUBAI

First time exhibitor at Arabian Travel Market, Miami and the Beaches Convention & Visitor Bureau, aims to inform the travel trade of its luxury lifestyle that could be attractive to the regional market.

According to Gisela Marti, vice president, marketing & tourism at the Greater Miami Convention & Visitors Bureau, it is the first time for Miami to proactively engage the Middle East travel industry in the Gulf: “We believe our multi-cultural urban city in many respects shares a number of similarities with major cities in this region, and we are here to say ‘Welcome! Come visit and join us in Miami for a fun luxury lifestyle experience.’”

Among the summer attractions is the Miami Spa Month taking place in July and August, during which time visitors are invited to test out a range of luxury spas with promotional treatments from just US$99. (www.MiamiSpaMonth.com)

Also exhibiting is Bal Habour, the glamour and fashion capital of the US south-east which is offering complimentary cultural initiatives, a Kids Club run by the Miami Children’s Museum and a Beach Fitness Programme.

Tailor-made packages, niche markets, enhanced use of social media and widening the Thailand tourism product beyond Bangkok and the beaches are on the agenda at Arabian Travel Market.

Representatives from the Tourism Authority of Thailand (TAT), Chiang Mai, Thailand Convention & Exhibition Bureau, the tour operator and travel industry sectors are working on an enhanced promotional campaign to continue growth out of the Middle East market.

TAT director of the Dubai and Middle East office, Chalermsak Suaranat, said that during the past two years, the number of visitor to Thailand from the region had grown considerably: “While the UAE remains in top position bringing 108,994 visitors to Thailand in 2012, other GCC countries are also emerging as potential expanding markets including Oman, KSA and Kuwait.

“Last year, Oman produced 65,690 visitors to Thailand, an increase of 21.7 per cent compared to 2011 -this was the highest increase across the Middle East region – and to further boost tourism we will be organising a series of road shows and familiarisation trips to Thailand, inviting media from the GCC as well as the Levant region including Lebanon, Jordan and Egypt to promote the destination.”

Throughout the remainder of 2013, the TAT Dubai & Middle East Office will be implementing a range of marketing strategies to attract Middle East tourists through the ‘Charm of Thainess’ which includes ‘Thai Experience’, ‘Thai Way of Life’ and ‘Thai Culture’.

TAT Dubai will also continue to reinforce the Thailand brand “Amazing Thailand Always Amazes You”, with a core focus on authenticity, value for money, and hospitality - in a recent survey conducted by the TripAdvisor travel site, Bangkok was rated the world’s second Best City next to New York for tourist shopping and third Best City for Value for Money.

Suaranat added that in 2013 a focus will be to offer tailor made itineraries, customised to individual clients’ requirement from a holiday in Thailand – whether it be group or individual. Middle East travellers are perfectly suited for this campaign as we focus more on the needs of each individual, couple, group or family.”

Niche markets being promoted in the region include Health and Wellness, Wedding and Honeymoon, Green Tourism and Golf, where he said Thailand offered exceptional value for money compared to other parts of the world: “Major and minor surgery along with cosmetics and dental care at the kingdom’s many numerous and highly qualified and specialised hospitals are being promoted as well as Thailand’s spa and wellbeing centres.”

HUNGARY FOR MICE AND MORE

Hungarian Tourism PLC has used Arabian Travel Market as a platform to launch a focused marketing drive for its unique health products in the Middle East markets, as well as meeting and event packages to Budapest and the area surrounding the famed Lake Balaton.

Ceo Marianna Dené said the region had become an increasingly important source market in the past two years: “We see positive signs to suggest that this trend will continue and expect a further increase in visitors from the region in 2013.”

As part of the latest promotion, cosmetic procedures and spas at the country’s specialised clinics and hospitals are being promoted as well as Hungary’s traditional medicinal water therapies, while MICE clients have been targeted with value-for-money, efficient infrastructure and services and warm Hungarian hospitality.

Competitive pricing is also a feature of Budapest’s attractions as one of Europe’s bargain capitals, which also boasts a 5,000 room inventory of first class and luxury hotels and accommodations and is running a Summer Festival from June to August, while Hungarian Tourism is also confident that Europe’s largest fresh water lake, Lake Balaton, as a natural and safe holiday destination for Arab families.

A further 465 rooms are set to open this summer on the Sheikh Zayed Road in Dubai, when the Novotel Dubai Al Barsha is launched, according to an announcement from Accor at Arabian Travel Market.

The 42-storey property has more than 100 inter-connecting family rooms and 89 furnished suites, and also features 10 function rooms catering for up to 250 participants at meetings and events – while a Meeting@Novotel promotion provides an all-inclusive customised meeting service for between 10 and 50 delegates.

Other facilities include free wi-fi throughout the hotel, a dedicated MAC web corner, a Cajun Louisiana restaurant and four other outlets, plus the Balance by Novotel fitness and spa centre with seven treatment rooms, two saunas and two steam baths and outdoor pool.

In addition, a Family & Novotel promotion is on offer permitting up to two children under the age of 16 to share their parents’ room with free breakfast; a 50 per cent discount on a second room for those aged between eight and 16, late check-out until 1700 hours on Saturdays, subject to availability, welcome gifts, supervised Kidz Club, children’s menus and baby equipment.

Flagship Dubai resort, Atlantis, The Palm has announced the launch at Arabian Travel Market of a number of innovations to drive business in existing and new markets during summer 2013 and beyond.

One new activity is the Ultimate Snorkel, offering guests an opportunity to swim in the 11 million litre Ambassador Lagoon with more than 65,000 residents, including sharks and rays, accompanied by experienced marine guides.

In addition, a 40-metre waterslide tower is being added to the Aquaventure waterpark, introducing new thrill rides utilising cutting edge technology, while additional extra casual dining facilities are also in the pipeline.

Meanwhile, to target emerging markets, Atlantis has engaged a number of Chinese, Russian and Indian language speakers to man its toll free booking number in order to streamline the reservation process for travellers from these countries.

Other buoyant emerging markets for Atlantis include Nigeria and Australia, the latter encouraged by the new Qantas/Emirates airline partnership that became operational in last month.

“We have seen fantastic growth in the Australian market and are expecting a further 35 per cent rise in the second half of 2013,” said svp marketing, Ravini Perera. “Australian travellers are savvy, they want authentic dining and entertainment experiences beyond the shopping malls … Atlantis is perfect for them.”