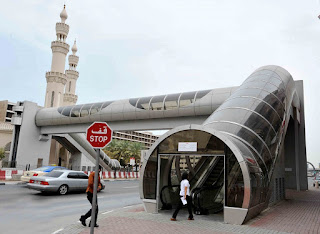 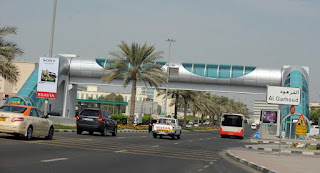 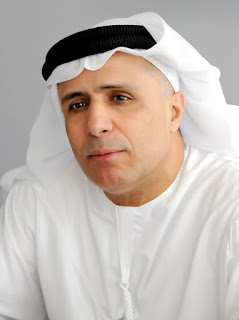 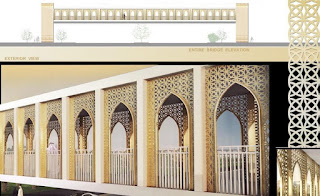 Dubai- Roads & Transport Authority – Mohammed Al Munji:
The Board of Directors of the Roads & Transport Authority (RTA), headed by H.E. Mattar Al Tayer, Chairman of the Board and Executive Director of the RTA, has endorsed a plan for constructing 17 pedestrian bridges during 2013 – 2016 covering vital areas in Dubai Emirate. The initial phase of the plan will see the construction of 9 bridges in 2013 – 2014 at a cost of 45 million dirham.

This will bring the total number pedestrian bridges in Dubai, which currently stands as 87 bridges including 34 footbridges at the metro stations, to 104 bridges by 2016.

“The construction of pedestrian bridges is a testament to RTA endeavours to provide safe pedestrian crossing means. The locations of the new bridges, which will be constructed in a number of vital locations in Dubai, have been selected in the light of traffic studies guided by a host of parameters that include the intensity of pedestrian movement on both roadsides, concentration of shopping and business activities, and the frequency of run-over accidents (black points) recorded in the area,” said Al Tayer.

“According to the approved plan, 9 bridges will be constructed in the initial phase (2013 and 2014) spanning several sites including: two footbridges at Bani Yas Road (one of them near the building of the Dubai Municipality), and a bridge at each of Damascus Road (near the Public Library), Al Mina Road, Baghdad Road, Al Maktoum Road, Al Khawaneej Road (near Arabian Center), Al Khail Road (near Al Qouz Industrial Area), and near Emirates Towers,” he continued.
“In the second phase (2015 – 2016), 8 footbridges will be constructed covering several key locations, namely: two bridges at Al Awir Road, and one bridge at each of Amman, Meydan, Damascus, Al Khawaneej, Al Quds and Doha Roads.
“In the near future the RTA will construct a footbridge on Al Khail Road 1 (opposite to the Dubai World Trade Center – Conventions Center), spanning 92 meters and fitted with two lifts at each side in order to handle the huge number of visitors of the Center,” added Al Tayer.

“The RTA adopts specific standards in designing & constructing pedestrian bridges in Dubai Emirate guided by traffic studies addressing the population density in the area, road driving speed, services provided at both sides of the road, and the number of traffic accidents in the area. Accordingly, the findings of these studies are translated into technical traffic solutions & projects examples of which include footbridges, signalized pedestrian crossings, humps, and speed calming devices among others.
“Work is up and running in constructing 13 pedestrian bridges at various sites in Dubai Emirate, some of them have been completed and construction works in the rest are set for completion next June. Among the key footbridges being developed are two bridges at the Sheikh Mohammed bin Zayed Road (the first is near the Vegetables & Fruits Market at Al Awir stretching 100 meters, and the second is near Workers Accommodation at Muhaisnah spanning 86 km). other bridges are currently being constructed in other roads that include Al Mina Road, Sheikh Rashid Road, Umm Suqeim Road, Al Wuhaidah Road, Amman Road, Latifa bint Hamdan Road, Abu Baker Al Siddique Road, and Al Khaleej Road, in addition to 4 footbridges at Jebel Ali Industrial Area,” explained Al Tayer.

RTA Chairman of the Board and Executive Director concluded his statement by calling on citizens and residents of Dubai to use footbridges & subways designated for crossing roads, and urged drivers to abide by the speed limits and slowdown at the approaches of pedestrian crossings for their own safety and the safety of road users.

Email ThisBlogThis!Share to TwitterShare to FacebookShare to Pinterest
Labels: footbridges in 2013 - 2016, rta