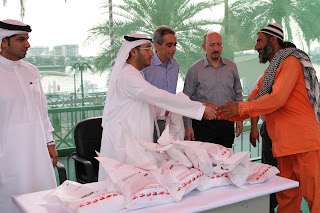 Dubai - Roads and Transport Authority – Abdul-Fattah Haidra:
The Roads & Transport Authority (RTA) has recently decorated a horde of workers employed in service & traffic projects in the Emirate of Dubai to mark the International Workers Day (May 1st) with the aim of showcasing the role of workers as key contributors to the development process.

Engineer Maitha bin Udai, CEO of RTA Traffic & Roads Agency, said: “The RTA is keen on felicitating all individuals contributing directly or indirectly to realizing its strategic objectives represented in constructing infrastructure projects such as roads, bridges, and tunnels among others; which echoes the responsibility we perceive and the role play in fostering the social solidarity amongst various community members.

“Events held to honour workers this year, which have been coordinated by the Community Service Team at the Traffic & Roads Agency, targeted workers serving at roads & maintenance projects undertaken by the RTA in Dubai Emirate as well as cleaning staff in RTA Head Office at Umm Al Ramool. The number of workers benefiting from RTA initiatives in 2013 has soared by as much as 49% from 516 workers in 2012 to 1015 workers in 2013, comprising 890 workers at construction sites, 100 cleaning staff, and 15 maintenance workers.

“Events included the distribution of breakfast meals to workers at construction sites, gift items, and free medical checkups for employees and workers in RTA Head Office in collaboration with several food & medical suppliers in the UAE such as Majid Al Futtaim Charity Foundation, Al Marai Company, AECOM Company as well as Easter and EMC medical companies.

“These celebrations which coincide with the International Workers Day are just natural rights enshrined in the teachings of our lofty Islamic religion which calls for dignified treatment and care for workers and introduced plenty of principles exhorting followers to ensure the welfare and the respectful treatment of workers and above all secure their rights as community members. This annual initiative of the Agency is meant to showcase and underline the massive achievements of workers in road projects, hence celebrating them on this Day tantamount to a recognition of their dedicated efforts in realizing the sweeping development in the Emirate of Dubai,” added Maitha. She cited a quote of HH Sheikh Mohammed bin Rashid Al Maktoum, who praised the vital role of workers in Dubai when said: “These categories play a vital role in our communities and some of them spent long years doing their jobs with full devotion, and we ought to thank them for their efforts. We intend to commend and celebrate them and bring to their knowledge that the services they render warrant thanks and appreciation as they have made life in the UAE community smooth and beautiful more than any time before,” she continued.

Engineer Maitha called upon staffs and government departments and organizations to assign more attention to dealing with workers and according them every respect & appreciation they deserve throughout the year. “The Traffic & Roads Agency is proceeding ahead with plans for communicating with all partners in the development process at all levels in order to boost the programs that have positive bearing on the community as a whole,” said the CEO of RTA Traffic and Roads Agency in a concluding remark.

Caption:
During celebrations of workers