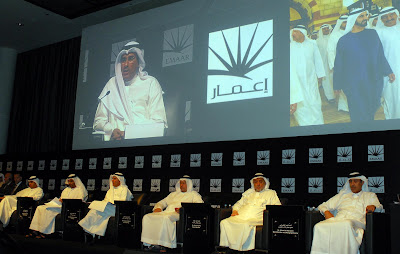 
Dubai, UAE; April 29, 2010: Emaar Properties PJSC, the global property developer, announced today at its 12th Annual General Meeting that its growth strategy for 2010 derives strength and momentum from the cautious approach followed by the company in managing costs and reducing reliance on debt capital markets during 2009, one of the challenging years for businesses globally.

Addressing shareholders, Mr Mohamed Alabbar, Chairman, Emaar Properties, explained that Emaar’s achievements in 2009 are a mark of the company’s inherent strength and robust fundamentals. “At Emaar, we have always adopted a cautious approach to managing costs at the early stage. We have made concerted efforts to reduce our reliance on debt capital markets and have depended mostly on internal resources.”

He said: “During the most challenging year for businesses globally, we focused on the timely completion of existing projects in Dubai and other global markets through efficient resource optimization.”

Among the key growth strategies for Emaar is its focus on developing real estate projects in the mid-market, affordable housing segment across all the countries in which it operates. Mr Alabbar said this focus on the “affordable luxury” segment will be complemented by the company’s continued commitment to project delivery and business segmentation. “We understand the need to develop real estate targeting the needs of youth in our markets. Emaar will meet their lifestyle aspirations.”

The crowning accomplishment of Emaar was the opening of Burj Khalifa, the world’s tallest building. “This singular feat of architecture and engineering reminds us that dreams, when grounded on firm foundations, will result in world-class achievements,” said Mr Alabbar. “All our business segments recorded tangible growth in 2009, with malls and hospitality making strong contributions to our revenue stream. Continuing this growth momentum, we recently opened the world’s first Armani Hotel in Burj Khalifa.”

Emaar today operates in 16 countries and has over 94 million sq ft of completed real estate development. The company delivered approximately 3,100 units during 2009, and revenues from malls and hospitality businesses increased significantly.

Emaar has joined hands with Giorgio Armani to strengthen its presence in hospitality. For more information, visit www.emaar.com.