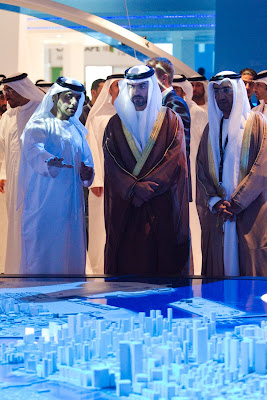 A huge scale model of how the capital of the United Arab Emirates will appear in 2030 was unveiled and forms the centerpiece of this year's Cityscape Abu Dhabi.

The 23 metre by 17 metre display is the biggest single model on show at Cityscape, the largest gathering of real estate professionals in the Middle East so far this year and being held at the Abu Dhabi National Exhibition Centre until 21 April 2010 under the patronage of HH Sheikh Mohammed bin Zayed al Nahyan, Crown Prince of Abu Dhabi and Deputy Supreme Commander of the UAE Armed Forces.

The model showcases major urban planning initiatives, bringing together economic, cultural, environmental and social aspirations of Abu Dhabi in a single format. The model covers an area from the Corniche on Abu Dhabi's main island to Shahama, Mussafah and Al Falah on the mainland and includes the islands of Saadiyat, Yas, Lulu, Reem and Sowwah.

“It is a visible demonstration of our commitment to deliver what we embarked upon three years ago, when the Urban Planning Council was set up by an Emiri decree. It will be a living, breathing model that will be constantly updated to reflect progress on the ground, and serve as a great communication and promotional platform for all of Abu Dhabi's stakeholders," said Falah Al Ahbabi, UPC General Manager.

Meanwhile, Cityscape Abu Dhabi organisers confirmed the worldwide airline disruption caused by the ash cloud from the Icelandic volcano had impacted attendance on the first day of the event.

More than 250 exhibitors from 36 countries are taking part in the show and around 800 chief executives are expected to attend, along with thousands of investors. “Cityscape Abu Dhabi has captured the world's attention with its well-developed plans for strategic projects,” said Rohan Marwaha, Managing Director of Cityscape.

“Unfortunately, the catastrophic event thousands of kilometres away in Iceland has had an impact here in Abu Dhabi,” he added. “Undoubtedly thousands of potential visitors from Europe and the Americas have been unable to get flights. Apart from the disruption caused by the Iceland volcano, we expect opening day visitor numbers to be on a par with last year.”

Running alongside Cityscape Abu Dhabi 2010 will be a new component to the event, CityBuild Abu Dhabi - an international trade show for the building and construction industry bringing together suppliers, manufacturers, distributors, architects, engineers, importers and procurement decision makers.