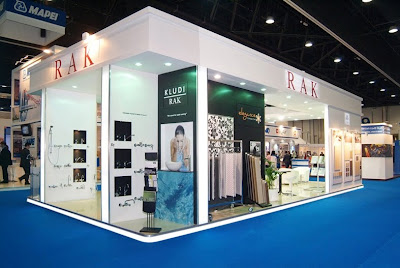 April 20, 2010
RAK Ceramics, the world's largest ceramics manufacturer, has announced that it is showcasing its latest range of eco-friendly SLIM tiles of up to only 4.5 millimetres in thickness, the new Stone Art Collections featuring KERAJET technology and ORION Collections featuring CHROMA technology, during its participation as Headline Sponsor of Cityscape Abu Dhabi 2010, the international real estate investment and development event being held at the Abu Dhabi National Exhibition Centre from April 18 to 21. RAK Ceramics gave away the Best Urban Planning and Architecture Award to Eastern Harbour, Alexandria, Egypt by Emaar, which was the highlight of the opening day of Cityscape Abu Dhabi.

KLUDI RAK, a leading manufacturer of world-class bathroom fittings and a joint venture between RAK Ceramics and high-profile German manufacturer KLUDI, is likewise introducing its new Paragon Series (Joystick) and Profile Series faucets at CityBuild Abu Dhabi 2010, a dedicated international trade event for the building and construction industry that is being held concurrently with Cityscape Abu Dhabi. KLUDI RAK is a founding sponsor of CityBuild Abu Dhabi.

Dr. Khater Massaad, CEO, RAK Ceramics said: "As a market leader and world’s largest ceramics manufacturer our participation in Cityscape Abu Dhabi and CityBuild Abu Dhabi is to reaffirm our strong presence in the Abu Dhabi market, which has been a key growth destination for our products and services. We certainly feel very confident with our long-term growth prospects in the emirate as our groundbreaking innovations such as the RAK SLIM 4.5-mm wonder tiles have established new benchmarks in the market. RAK SLIM’s eco-friendly features and Kludi RAK’s latest water saving systems have already made it a popular choice for various prestigious environment-friendly development projects."

"RAK Ceramics and KLUDI RAK also seek to take advantage of the presence of key decision makers, international developers and contractors to generate new business leads across other high-growth markets in the Middle East. The back-to-back exhibitions also provide a convenient and effective platform for us to highlight and generate awareness about the advantages of our products in terms of enhancing the safety and eco-friendly atmosphere of a wide range of real estate projects," added Dr. Massaad.

RAK Ceramics has lined up its new RAK SLIM designs to headline its exhibition at Cityscape Abu Dhabi. RAK SLIM is being offered in 30x60, 60x60 and 45x90 sizes, while new designs of ceramic tiles in regular sizes are also being showcased at the event. KLUDI RAK is presenting its new faucets in the Paragon Series and Profile series, which are all equipped with KLUDI RAK's new water-saving system that allows users to save up to 50 per cent on water consumption.

RAK Ceramics also announced that Dr. Khater Massaad will serve as one of the keynote speakers during the exhibition's accompanying trade conference.

RAK Ceramics is a USD 1 billion global conglomerate in the ceramic industry that exports its products to over 150 countries, targeting architects, project developers and retail customers. RAK Ceramics has recently been conferred the Superbrand 2010 Award and continues to be a global pioneer in the world of ceramics.
Posted by Imre Solt at 2:48 PM