Cityscape Abu Dhabi gets down to business 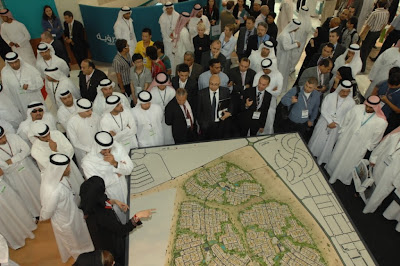 Cityscape Abu Dhabi gets down to business

A business-like approach to real estate development and investment rather than the speculation of the past will be reflected in this year’s Cityscape Abu Dhabi opening tomorrow (Sunday 18 April 2010), according to the organisers.

“The world has changed and Cityscape is no longer about people scrambling for off-plan properties to flip as quickly as possible,” said Rohan Marwaha, Managing Director, Cityscape. “Now, the emphasis is on business-to-business, joint ventures, partnerships and the like rather than the speculative investment schemes of the past.

“Nevertheless we are still expecting to see major announcements on the progress on the big Abu Dhabi development projects which are an increasingly important element of the UAE capital’s future growth plans,” added Marwaha.

Cityscape Abu Dhabi will be the largest gathering of real estate professionals in the Middle East so far this year and is being held at the Abu Dhabi National Exhibition Centre until 21 April 2010 under the patronage of HH Sheikh Mohammed bin Zayed al Nahyan, Crown Prince of Abu Dhabi and Deputy Supreme Commander of the UAE Armed Forces.

“Abu Dhabi is diversifying its oil-dependent economy with real estate and infrastructure projects costing more than $300 billion which is capturing world attention,” said Marwaha. “While the UAE capital has not been immune to the global economic downturn, it has the cushion of more than 90% of the UAE’s oil reserves as well as significant financial reserves in sovereign wealth funds. If anything, the downturn has reinforced Abu Dhabi’s realistic approach to development with the big, strategic projects going ahead as planned.

“In economic terms, Abu Dhabi is growing exponentially with the UAE's non-oil economy increasing by around 10% in real terms last year. Abu Dhabi’s 2030 infrastructure plans are aimed at delivering residential and business areas to attract global industries and financial institutions as part of that continued growth. As a result of the increased international stature of Abu Dhabi, continued development will be needed along with careful planning and timely execution.”

Real estate development opportunities in the region and beyond will be featured at the show with exhibitors are coming from the UAE, Switzerland, Hong Kong, the United States, Jordan, the United Kingdom, Portugal, Italy, Sudan, France, Mexico, Lebanon, Canada, Spain, Malaysia, Singapore, Ireland, Kuwait, Australia, Germany, China and Poland.

Among the numerous exhibition highlights will be:

• 30 projects showcased by the Department of Municipal Affairs in Abu Dhabi, along with Abu Dhabi, Al Ain and Western Region Municipalities.

• The design of the Four Seasons Hotel Abu Dhabi at Sowwah Island being developed with Mubadala.

• Harrods Estates, the property division of the renowned Knightsbridge store in London are taking part for the first time.

At the conference which forms part of Cityscape Abu Dhabi the emphasis will be on transparency, regulation and project delivery. There will also be a series of closed-door, invitation-only forums where investors can source up-to-date information on global investment opportunities.

Running alongside Cityscape Abu Dhabi 2010 will be a new component to the event, CityBuild Abu Dhabi - an international trade show for the building and construction industry bringing together suppliers, manufacturers, distributors, architects, engineers, importers and procurement decision makers.


About Cityscape Abu Dhabi
Cityscape Abu Dhabi, the International Real Estate Investment and Development Event, provides a platform for regional and international real estate community to come together to network, create partnerships and discuss the future of real estate. It is part of a portfolio of Cityscape events in the Middle East, Asia and the Americas organised by IIR Middle East (www.iirme.com), the largest trade and consumer event business in the region and part of the Informa Group plc (www.informa.com)
Posted by Imre Solt at 8:13 PM