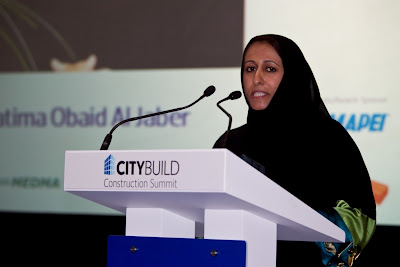 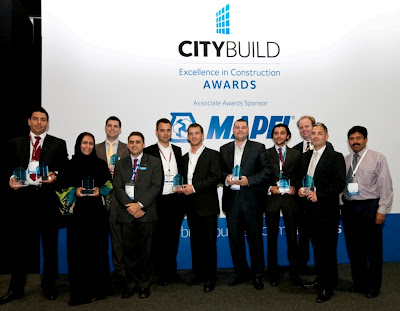 A pioneering senior executive who has broken male domination of the region's building industry boardrooms has received the first-ever Woman in Construction Award.

Receiving the award at CityBuild Abu Dhabi, a new trade show for the Middle East building and construction industry, Fatima Obaid Al Jaber, Chief Operating Officer of Al Jaber Group, said: “By receiving this award I hope to be opening the doors for more women to follow.”

Al Jaber was among a number of winners to receive CityBuild Excellence in Construction Awards during the show at the Abu Dhabi National Exhibition Centre which runs until 21 April 2010.

“The judges were looking for an individual who has overcome the real and perceived obstacles of working within a male-dominated industry,” said Graham Wood, Group Director of CityBuild Abu Dhabi organisers IIR Middle East. “Fatima Al Jaber has forged a successful career in this competitive industry, providing a pioneering role model and inspiration for future generations of women working in construction.”

Fatima Al Jaber has been voted by Forbes Arabia among the top most influential women in the Arab world. She sits on Al Jaber Group's board as an Executive Director and her key responsibilities include overseeing the management of contracting, logistics, industrial, trading, investment and real estate subsidiaries. She is also on the boards of the National Investor and Abu Dhabi Takaful Company.

The CityBuild Excellence in Construction Awards have been introduced to recognise outstanding performance and excellence in the industry with all entries reviewed by an advisory board composed of leading names in the industry, the organisers said.

The CityBuild Honorary Award, made to an individual or organisation that has made a significant contribution and demonstrated outstanding service to the construction industry, went to the Department of Economic Development, Abu Dhabi.

In the Construction Products Award category, the winner of the Best Water Technology product was Waterwise Systems, by Green Precast Systems and Technologies. Best Building and Construction product was Archilede by Iguzzini Middle East. Green Product of the Year was Environmena Power Systems.

Showing respect to Arabic cultural tradition and Islamic values and by special request, Cityscape and CityBuild Abu Dhabi have announced that the exhibitions will be open to ladies’ only from 3 until 8pm on Wednesday 21 April.

2: CityBuild Excellence in Construction Award winners with their awards.
Posted by Imre Solt at 12:13 PM