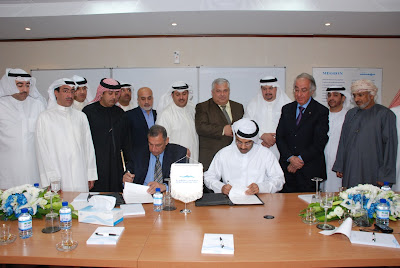 Following a recent meeting in Cairo:

May 17, 2009
Dubai Maritime City Authority recently held a meeting in Cairo with the Arab Sea Ports Federation (ASPF) to activate the memorandum of understanding signed by both parties earlier this year, which aims at identifying and capitalising on joint opportunities for cooperation and mutual growth between the two parties.

One of the most important steps approved during the meeting was the establishment of a mechanism that ensures full capitalisation by ASPF of Emirates International Maritime Academy’s offering, whereby the Academy will send details of its experts and trainers to the Federation, which in turn will share them with the different members. In addition, the Academy will continuously update ASPF and its members on its course offerings and programmes, as well as providing a range of benefits for members including the reduction of tuition fees and granting of scholarships.

Commenting on the occasion, Abdulla Al Hayyas, Senior Manager – Emirates International Maritime Academy and Dubai Maritime City Campus, stated: “Our partnership with the Arab Sea Ports Federation is an integral part of Dubai Maritime City Authority's programme to engage in long-term business relationships with leading regional and international maritime institutions and help expand our relationships and presence across the Arab world, especially within key maritime centres of the region.”

On his part, Rear Admiral Essam Eddin Badawy, Secretary General of ASPF, stated: "As a federation representing the Arab maritime community, it is vital that we take advantage of the strengths and services that such a leading Arab authority has to offer, especially when it comes to Emirates International Maritime Academy, as there is a dire need for its expertise and offering by all members of the federation. In addition, this partnership will provide further boost to our strategic initiatives and enhances our ability to capitalise on new business prospects that Dubai Maritime City Authority will open.”

Established in 1976 and headquartered in Alexandria, Egypt, the Arab Sea Ports Federation aims at reinforcing the development of Arab maritime ports. It objectives include developing, improving and coordinating members' work fields, strengthening the relationships between them and participating in achieving economic integration among the Arab States, through practicing its mission, specialties and expertise in Arab maritime. It also acts as a general framework through which coordination is attained between existing Arab regional port unions or those to be established in the future. The Federation’s members include the ports of 20 Arab nations in addition to marine transport corporations and those with port-related activities.
Posted by Imre Solt at 11:32 AM