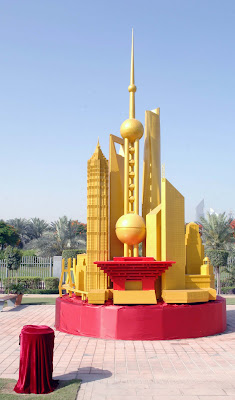 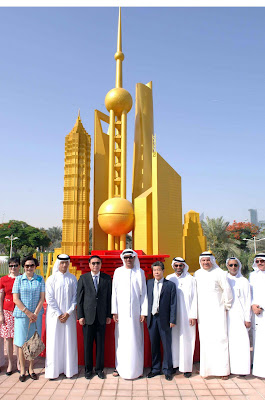 The ceremony was also attended by the Consul General of the People's Republic of China in Dubai Mr. Gao Youzhen, Assistants to the Director General of Dubai Municipality, Directors of the Departments and Heads of Sections in the Municipality, members of the Chinese delegation that accompanied Mr. Guoqin and a host of officials from the Chinese Consulate.

Setting up of the Shanghai Monument in Zaabeel Park, which is one of the most important tourist attractions situated in the heart of the city of Dubai, is considered part of the different sister city agreements signed by Dubai with major cities of the world including Istanbul, Beirut, Detroit, Osaka etc.
Welcoming the Chinese delegation Mr. Lootah said that monuments of the cities, with whom Dubai has signed sister city agreements, are currently being constructed inside Zaabeel Park.

Lootah said that more cities that have signed sister city agreements with Dubai will be setting up monuments in Zaabeel Park, including Beirut. The Park already has monuments of Vienna and Osaka.

Mr. Guoquin said the monument not only represents the present Shanghai, but also the future city, which is fast becoming an important hub of international business in the 21st century.

He also expressed his appreciation of the great boom witnessed by Dubai in various areas of development.


Photo: Eng. Hussain Nasser Lootah, Director General of Dubai Municipality along with his colleagues poses with the Chinese delegation during the unveiling of the Shanghai Monument in Zaabeel Park on Wednesday.
Posted by Imre Solt at 6:06 PM