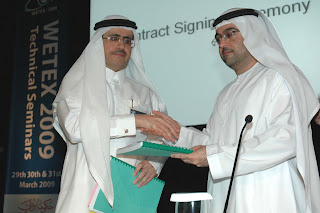 
H.E Saeed Al Tayer signed various contracts on Monday, 30th March’09; the contracts were signed for 13 substations in total for the construction of important projects for the total amount of Dhs. 1.534 billion. This is a part of the extensive developments initiated by DEWA, these projects are awarded to provide, supply installation, testing and commissioning of substations and associated works. This is executed in conformity with the directives of the Government of Dubai to provide services for the rapid growth in the Emirate.

H.E Saeed Al Tayer said that the project stems from the strategic plan that DEWA has adopted as the basis for providing optimum services to the community. Its cornerstone is the Master Plan of Electricity Networks, which has been developed in order to support the Emirate’s ambitious development plans and meet its growing requirements for stable and continuous electricity and water supplies.

H.E Saeed Al Tayer congratulated the winners of these contracts, he stressed the importance of quality in our services and projects, and also asked the contractors to conceive this important factor as DEWA expects them to comply therewith at all project stages and to execute the project within the specified time. DEWA extended its full cooperation to the contractors to complete the project successfully in time while considering the quality, safety, and environment protection at all stages.
Posted by Imre Solt at 4:35 PM