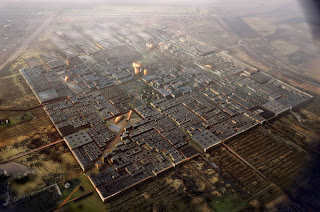 Global slowdown notwithstanding, the capital of the United Arab Emirates continues to be transformed with masterplan budgets for the city’s top ten civil projects worth $208 billion remaining in place.

Details of the top ten projects from new cities and island resorts to new communities and a light rail system are revealed today (8 March 2009) by the organisers of Cityscape Abu Dhabi, which takes place from 19-22 April at the Abu Dhabi National Exhibition Centre

“Abu Dhabi is not immune from the global financial turmoil but has wisely avoided over exposure to the stressed international and regional credit markets,” said Mark Goodchild, Exhibition Director for organisers IIR Middle East.

“The big difference for Abu Dhabi compared with other cities is that while the emirate will collect less in revenues from oil than the records set in 2008, the capital has been financially prudent and has a sovereign wealth fund estimated at $328 billion at the end of 2008.”

More than $208 billion has been earmarked in the long-term masterplan budgets across the top ten civil projects in the UAE capital, many of which will be showcased at Cityscape Abu Dhabi, the international real estate and investment development event.

“While there has been some doubt expressed about the timescale and magnitude of several projects across the UAE, the sheer scale of those continuing to take place in Abu Dhabi is truly remarkable by any international standard,” Goodchild added.

The top ten projects identified by research company Proleads are:

1. The biggest single project is the new capital city for Abu Dhabi – Khalifa City. It has a masterplan budget of $40 billion and is planned to comprise all federal ministries, local government offices and embassies. The city is expected to be completed by 2030.

2. Work has started on the Yas Island Development, a massive $39 billion masterplan budgeted mixed use tourist development including residential, hotels, beaches, marinas, retail, golf and equestrian facilities. The island will have a total developed area about one-third the size of Abu Dhabi island. Total packages budgeted so far amount to $3.5 billion

3. Burooj Properties is behind a masterplan $24 billion mixed use real estate community project in Abu Dhabi to include 11 residential towers, offices, four hotels and a shopping mall.

5. A $22 billion budget has been allocated for the ambitious Masdar City project, billed as the first zero-carbon, zero-waste city. It will depend on solar energy. Masdar City will also be car-free. Total packages budgeted so far amount to $2.4 billion.

6. Underway is the $18.5 billion Al-Raha Beach Complex, another mixed-use hospitality development involving reclaimed land and will include 50 high-rise and a number of low-rise buildings for approximately 120,000 people.

8. Al-Reem Island development is a $7.8 billion mixed-use community next to the bridge connecting Al-Reem Island to Abu Dhabi city. Several 40 and 50 storey towers will form the central business district. The development will include two 80-storey buildings and house approximately 80,000 people.

9. With a masterplan budget of $6.5 billion, Sheikh Mohammed Bin Zayed City is another new city comprising 374 residential and commercial buildings as well as the associated infrastructure and entertainment facilities. Total packages so far amount to $924 million.

10. At joint number ten with masterplan budgets of $3 billion each are the Abu Dhabi Light Rail project and the MGM Grand Hotel. The rail project will involve some 350 kilometres of rail. The MGM Grand project will have two further branded luxury hotels and more than 1,200 rooms. It will also feature a 12,000 seat arena, retail, restaurants, waterfront residences and private yacht berths.