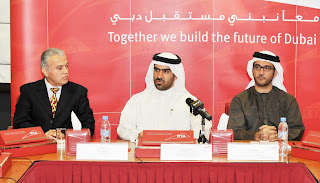 
Dubai (United Arab Emirates): Roads & Transport Authority (RTA) is bracing for the biggest Dubai Metro Marketing Campaign ahead of the scheduled launch of the project on 09/09/09 in association with Saatchi & Saatchi Co.; which was recently awarded this job in a tender put out by the RTA.

Ramadan Abdulla Mohammed, Director of Operations Department at RTA Rail Agency, said: “The importance of the marketing campaign stems from its role in unveiling and showcasing Dubai Metro Project; the pioneer and longest driverless rail network completed in one phase worldwide, and its substantial contribution towards fulfilling the vision of the RTA in providing Safe & Smooth Transport for all. The Project is capable of transforming the behavioural pattern, lifestyle and thoughts of many people in Dubai. However, to materialize this transition, intensive marketing & awareness campaigns have to be launched.

“This Campaign comes in the context of the Strategic Plan spanning up to 2020 targeting to increase the share of metro use to 17% among Dubai residents. The AED 15b Dubai Metro Project ranks among the top and vital projects in the emirate. It has a 75 km-long track that encompasses an elevated sector, a sector at the grade and an underground sector. The project envisages 47 stations housing retail and commercial outlets that provide commuters with all means of entertainment, services and facilities such as newspapers, magazines, consumer items among others.

For his part Elias Ashqar, Regional Executive Director of Saatchi & Saatchi Co. Said: “The Co. is proud of teaming up with the RTA and we are looking forward for more joint cooperation in the long run as part of a long lasting partnership, in line with the strategic vision set and wisely pursued by the RTA. Saatchi & Saatchi ranks among the biggest advertising agencies worldwide. The Co., which was established in 1970 in London, has now more than 150 branches employing 6,000 employees in 86 countries. Customers portfolio incorporates more than 60 of the top 100 advertising agency in the globe. Over the last 5 years alone, Saatchi & Saatchi swept 3500 international awards.

Peyman Younes Parham, Director of RTA Marketing & Corporate Communication Dep’t said: “This marketing campaign runs for one year and comprises three phases to cover the project comprehensively. Phase I focuses on the project introduction in terms of launch timing, shape design and message selection i.e. (My Metro). Phase II is the basic stage comprising all information related to the metro operation, fare, public services, station services, multi-modal integration, and security & safety means. Phase III is the preparatory phase that sets the stage for the launch day on 09/09/2009; also incorporating a supplement to Phase II.

“The Campaign covers all media, promotional and marketing outlets of this pioneer project. Examples of these include television stations, radio channels, newspapers, and magazines, directional signboards on roads, bridges and tunnels across the GCC. It will be delivered in several languages to address all community segments.

“The objective of the Campaign is to introduce the public to the services & facilities rendered by Dubai Metro Project, which provides Dubai residents with the best and highly sophisticated transit system in the transportation industry. It is viewed as a new ring in the ongoing series of successes made by the RTA, and opens up more employment and investment opportunities.

“Through this Campaign, RTA is not targeting a specific age group or community segment, but focuses on the whole spectrums of the community. Various awareness messages will be directed to different community segments. Emphasis will be made towards making Dubai Metro one of the leading flagship projects in Dubai such as Burj Al Arab, Burj Dubai, The Palm, The World among others. The theme (My Metro) will be stressed such that all passengers will be proud of using this metro in their daily travels” added Peyman in a concluding remark.
Posted by Imre Solt at 10:08 PM