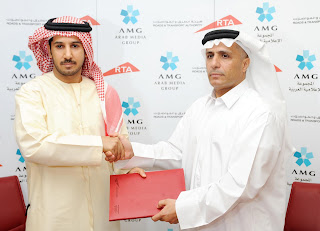 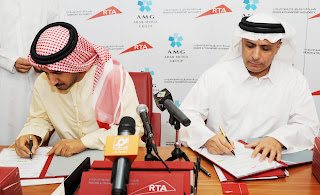 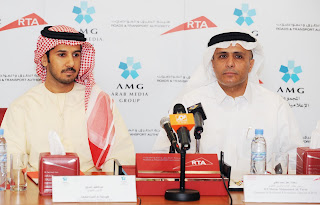 Dubai – 10 March 2009: Roads & Transport Authority (RTA) signed a strategic partnership agreement with the Arab Media Group (AMG) to boost the fraternal relations, and awareness level of road users. The Agreement also seeks to disseminate traffic education of the community and encourage them to use mass transit modes such as public buses, marine modes and Dubai Metro.

H.E. Al Tayer expressed his content with the Agreement stating that Arab Media Group is considered the single biggest media establishment in the country, its list of mediums comprising 8 radio stations, 3 television stations and 3 daily newspapers providing multilingual services to the public in addition to 4 media companies specialized in delivery, printing, event management and outdoor media. Al Tayer said: “This Agreement culminates the distinguished partnership adopted by the RTA in dealing with different media entities since its inauguration, because we believe that media is a mirror reflecting the reaction of the society to the different projects and services provided by the RTA.

Al Tayer also noted: “The material published in the media is extremely important to all RTA executives. RTA monitors all material published about its activities, be it news, views or comments , and analyzes every piece of information or constructive criticism that aims to boost the service delivered to citizens and expatriates living in the city of Dubai.

“According to this Agreement RTA will spend 30 million dirham on all advertising, marketing and media services published and aired in the different mediums owned by AMG. In return RTA will receive preferential treatment and special rates on all ads and marketing campaigns. Through its marketing and ad campaign, RTA will focus on spreading public awareness of road users with a view to decreasing traffic accidents and offences.

“Coordination and cooperation with the General HQ of Dubai Police in launching traffic campaigns and traffic enforcement as well as the black points system has played a major role in decreasing fatality rates due to road accidents from 24 deaths in every 100000 of the population to 17 deaths in every 100000 registering a 30% decrease for the first time since 1998. Marketing and media campaigns will focus on educating the public on utilizing public transport provided to them by RTA be it land or marine transport and soon adding the Dubai Metro. The government invested huge amounts of money to upgrade mass transit system to meet the requirements of the all community segments. 'Ask RTA initiative' is also being promoted to receive and respond to public queries”.

H.E the Chairman of the Board and Executive Director of RTA also added: “AMG will provide a continuous window on its TV station Noor Dubai with the latest updates on traffic in the emirate and live footage from RTA. The latest traffic updates will be aired on radio channels, particularly in emergency cases, and motorists will be guided to use alternate routes. AMG also will provide special segments on its radio and TV stations as well as its published daily newspapers including special features and news on the RTA. One final task is a virtual link between both the RTA and AMG websites

H.E. Abdul Latif Al Sayegh Chief Executive Officer for AMG, said: “This alliance with the RTA will enhance the vision of the AMG to support the initiatives capable of upgrading the awareness of social and environmental issues; which will upgrade the profile of individuals and the community at all levels. The partnership with the RTA will definitely help us deliver its vision to our readers, audience and viewers of various AMG media. This diversity of media channels makes it easier to access the largest possible segment of the public and we hope to team up with the RTA in building a global village in terms of facilities and services, but with the highest levels of safety”.
Posted by Imre Solt at 4:33 PM